– Conference call for investors and media on Tuesday, July 30, 2019 at 4:00 p.m. ET with introduction to Dr. Jonah Sacha for CURE and PrEP programs, Dr. Bruce Patterson for CCR5 receptor occupancy for HIV and cancer, and Dr. Jacob Lalezari for TNBC trial

CytoDyn Inc. (otc.qb:CYDY), (“CytoDyn” or the “Company”), a late stage biotechnology company developing leronlimab (PRO 140), a CCR5 antagonist with the potential for multiple therapeutic indications, today announced the completion of development of the Receptor Occupancy Test to measure the expression of CCR5 in HIV and tumor cells that are occupied by leronlimab. Development of this test could more precisely guide CytoDyn in identification of patients at screening for monotherapy.

“The development of the Receptor Occupancy Test is an important milestone for CytoDyn because it may allow more precise screening for leronlimab monotherapy,” stated CytoDyn President and CEO, Nader Pourhassan, Ph.D. “Over 600 HIV patients that have taken leronlimab as a single agent over the years have had no drug related SAEs,” continued Dr. Pourhassan. “The potential for leronlimab to be a safe and effective treatment for HIV with highly accurate dosing is an important driver of continued excitement and support from key opinion leaders within the medical community,” Dr. Pourhassan concluded.

Significantly, CytoDyn has been granted an in-person meeting with the U.S. FDA to discuss its pivotal monotherapy protocol that could lead to label expansion approval should leronlimab have its first approval as a combination therapy. To date, 110 patients have reached approximately one year of monotherapy trial with six patients in the extended portion reaching almost three years. Four patients in the extension arm of a previously reported Phase 2 monotherapy trial have continued on leronlimab monotherapy for nearly five years with no drug related SAEs and no viral breakthroughs.

The Company will host a conference call for investors and media on Tuesday, July 30, 2019, to discuss the latest developments, provide a comprehensive update about CytoDyn, along with comments from Drs. Sacha, Patterson and Lalezari.

A live audio webcast will also be available at: www.cytodyn.com and at https://78449.themediaframe.com/dataconf/productusers/cydy/mediaframe/31691/indexl.html.

The U.S. Food and Drug Administration (FDA) has granted a “Fast Track” designation to CytoDyn for two potential indications of leronlimab for deadly diseases. The first as a combination therapy with HAART for HIV-infected patients and the second is for metastatic triple-negative breast cancer (mTNBC). Leronlimab is an investigational humanized IgG4 mAb that blocks CCR5, a cellular receptor that is important in HIV infection, tumor metastases, and other diseases including NASH. Leronlimab has successfully completed nine clinical trials in over 800 people, including meeting its primary endpoints in a pivotal Phase 3 trial (leronlimab in combination with standard anti-retroviral therapies in HIV-infected treatment-experienced patients).

CytoDyn is a biotechnology company developing innovative treatments for multiple therapeutic indications based on leronlimab, a novel humanized monoclonal antibody targeting the CCR5 receptor. CCR5 appears to play a key role in the ability of HIV to enter and infect healthy T-cells. The CCR5 receptor also appears to be implicated in tumor metastasis and in immune-mediated illnesses, such as graft-vs-host disease (GvHD) and NASH. CytoDyn has successfully completed a Phase 3 pivotal trial with leronlimab in combination with standard anti-retroviral therapies in HIV-infected treatment-experienced patients. CytoDyn plans to seek FDA approval for leronlimab in combination therapy and plans to complete the filing of a Biologics License Application (BLA) in 2019 for that indication. CytoDyn is also conducting a Phase 3 investigative trial with leronlimab (PRO 140) as a once-weekly monotherapy for HIV-infected patients and, plans to initiate a registration-directed study of leronlimab monotherapy indication, which if successful, could support a label extension. Clinical results to date from multiple trials have shown that leronlimab (PRO 140) can significantly reduce viral burden in people infected with HIV with no reported drug-related serious adverse events (SAEs). Moreover, results from a Phase 2b clinical trial demonstrated that leronlimab monotherapy can prevent viral escape in HIV-infected patients, with some patients on leronlimab monotherapy remaining virally suppressed for more than four years. CytoDyn is also conducting a Phase 2 trial to evaluate leronlimab for the prevention of GvHD and has received clearance to initiate a clinical trial with leronlimab in metastatic triple-negative breast cancer. More information is at www.cytodyn.com.

This press release contains certain forward-looking statements that involve risks, uncertainties and assumptions that are difficult to predict, including the potential for the recently developed occupancy test to measure the expression of CCR5 in HIV and tumor cells and the potential for leronlimab in CURE and PrEP programs for HIV. Words and expressions reflecting optimism, satisfaction or disappointment with current prospects, as well as words such as “believes,” “hopes,” “intends,” “estimates,” “expects,” “projects,” “plans,” “anticipates” and variations thereof, or the use of future tense, identify forward-looking statements, but their absence does not mean that a statement is not forward-looking. The Company’s forward-looking statements are not guarantees of performance, and actual results could vary materially from those contained in or expressed by such statements due to risks and uncertainties including: (i) the sufficiency of the Company’s cash position, (ii) the Company’s ability to raise additional capital to fund its operations, (iii) the Company’s ability to meet its debt obligations, if any, (iv) the Company’s ability to enter into partnership or licensing arrangements with third parties, (v) the Company’s ability to identify patients to enroll in its clinical trials in a timely fashion, (vi) the Company’s ability to achieve approval of a marketable product, (vii) the design, implementation and conduct of the Company’s clinical trials, (viii) the results of the Company’s clinical trials, including the possibility of unfavorable clinical trial results, (ix) the market for, and marketability of, any product that is approved, (x) the existence or development of vaccines, drugs, or other treatments that are viewed by medical professionals or patients as superior to the Company’s products, (xi) regulatory initiatives, compliance with governmental regulations and the regulatory approval process, (xii) general economic and business conditions, (xiii) changes in foreign, political, and social conditions, and (xiv) various other matters, many of which are beyond the Company’s control. The Company urges investors to consider specifically the various risk factors identified in its most recent Form 10-K, and any risk factors or cautionary statements included in any subsequent Form 10-Q or Form 8-K, filed with the Securities and Exchange Commission. Except as required by law, the Company does not undertake any responsibility to update any forward-looking statements to take into account events or circumstances that occur after the date of this press release.

Agreement represents a revenue opportunity as a diagnostic test for receptor occupancy and the existence of CCR5 on cancer tissue and in HIV VANCOUVER, Washington, Jul 26, 2019 — CytoDyn Inc. (otc.qb:CYDY), (“CytoDyn” or the […] 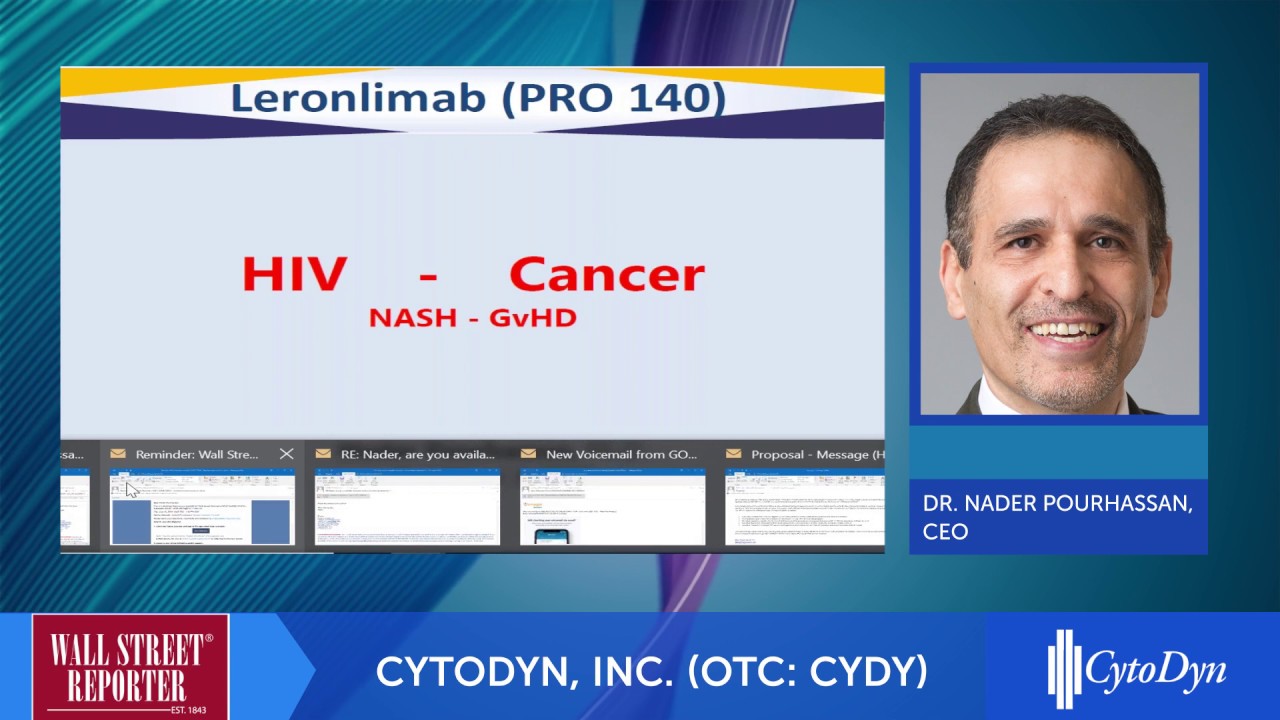